Jean Cocteau (1889-1963), one of the leading figures of the French avant-garde, was a polymath with a career that spanned fifty years. He was a poet, a playwright, a novelist, a designer, a filmmaker, an artist and a critic; however, he described himself simply as a poet, considering all his work a form of poetry. Born and raised in Paris, he was part of an illustrious circle of artists, writers, musicians and thinkers such as Pablo Picasso, Sergey Diaghilev, Erik Satie, Marcel Proust, and Edith Piaff.

Cocteau first began making ceramics in 1957, after meeting ceramicists Marie Madeleine Jolly and Philippe Madeleine. Working from their studio at their villa in Villefranche-sur-Mer on the Côte d’Azur, Cocteau held his first exhibition of ceramics in Paris in 1958. Like his drawings, his ceramics tended towards clean, simple graphic lines without excess ornament, and he drew inspiration from classical mythology and legends. Each piece he designed was produced in small, limited editions and whilst broad in their artistic scope, often revolved around mystical or magical figures.

Three plates by Jean Cocteau are coming up for sale in the Modern & Contemporary Art Sale on 9th October. They are joined by a plate by Cocteau’s long-term friend Pablo Picasso. 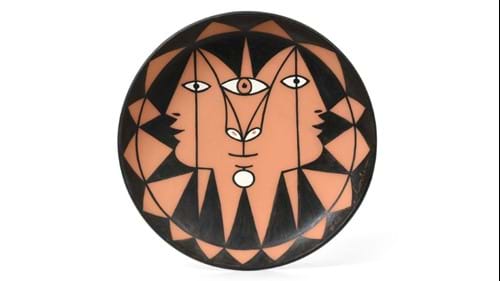 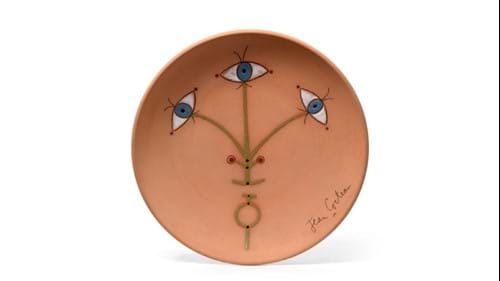 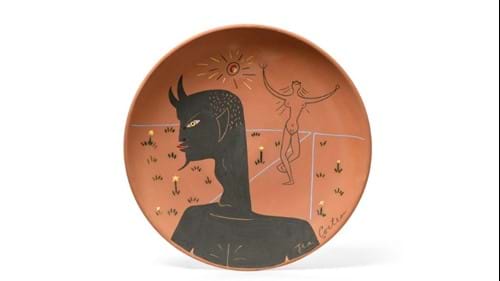 Like Cocteau, Picasso began making ceramics after becoming acquainted with potters in the South of France. He initially saw the craft as a summer respite from the more strenuous work of painting, but he would go on to design over 633 ceramic editions between 1947 and 1971. His earlier ceramics were plates and bowls, but then went on to create more complicated forms such as pitchers and vases often in animal forms whilst experimenting with varied techniques. Picasso used two techniques when producing limited editions of his designs; firstly, he painstakingly hand replicated original designs as closely as he could. The second technique, as seen in the plate below, was to create dry clay moulds of original designs into which wet clay was pushed to replicate the original; such pieces are stamped ‘Empreinte Originale de Picasso’.

Picasso’s ceramics are highly creative and often playful. Like Cocteau, he was deeply inspired by mythology, particularly Greek legends. However, he also created many designs inspired by animals, particularly fish and owls. 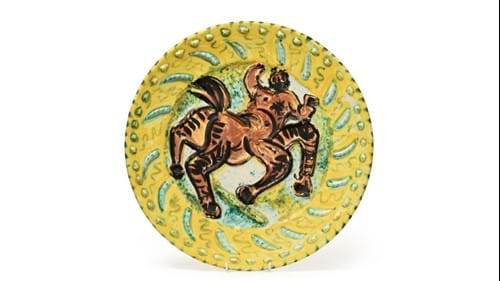